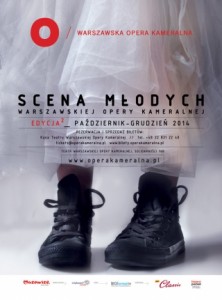 On 16 and 17 October, the Warsaw Stage Society will take part in the staging of “Bacchantes” based on Euripides’ drama, directed by Kamila Michalak, using fragments of the opera “Die Bacchantinnen” by Egon Wellesz.

Literary scholars consider “Bacchantes” to be one of the best works in the work of Euripides preserved to our times. This is the last tragedy of this author, telling about the beginnings of the cult of Dionysus and the dramatic fate of the king of Thebes Pentheus, who had to pay with his life for his opposition to new practices.

In the role of Bacchants on the stage of the Warsaw Chamber Opera (as part of the Youth Stage) the female part of the Choir of the Warsaw Stage Society will perform fragments of the opera “Die Bacchantinnen” by the Austrian composer Egon Wellesz.

Tickets for PLN 25 can be purchased at the www.bilety.operakameralna.pl and at the WOK ticket office.

We cordially invite you!