Under the aegis of WTS, in the years 1998-2018 there was a mixed vocal ensemble, performing successively under the names: Polish Choir Jeunesses Musicales, Strussingers, Choir of the Warsaw Stage Society. 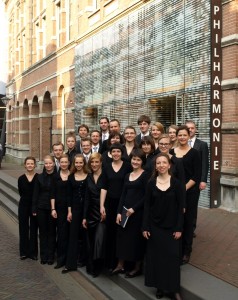 From the beginning of its existence until 2006, the conductor and artistic director of the choir was Ewa Strusińska, in the years 2006-2008 the ensemble was led by Aleksandra Kopp, and from 2008 to 2018 the artistic directions were set by Lilianna Krych.

One of the most unique concerts-performances with the participation of the ensemble was the movement and sound interpretation of the graphic score "Treatise" by Cornelius Cardew as part of the Warsaw Autumn Festival 2016. The choreography and performer of the solo dance part was Liwia Bargieł.

In the 2008/2009 season, the choir successfully took part in two competitions: the XI Łódź Choral Festival Cantio Lodziensis 2008 (third place) and the XVIII Myślenice Festival of Choral Song "Carols and Pastorals" (second place). In 2017, he won the third prize during the choral competition in Chivasso, Italy.

The choir has many stage productions to its credit. In the artistic season 2004/2005 he took part in the production of several opera performances. The first of them is "The King of Shepherds" by Oskar Kolberg, staged at the Collegium Nobilium at the Warsaw Theatre Academy (directed by Jan Buchwald, music direction: Andrzej Wróbel, music performed by Camerata Vistula). The second was Johann Strauss's operetta "Revenge of the Bat", which premiered at the Polski Theatre in Warsaw. The performance was directed by Andrzej Strzelecki. The musical direction was taken over by maestro Jerzy Maksymiuk, who conducted the Sinfonia Varsovia orchestra. In 2014, the WTS team took part in the production of "Don Giovanni" by W.A. Mozart directed by Ryszard Ciesła at the Warsaw Chamber Opera during the Mozart Festival and Euripides' "Bacchantes" directed by Kamila Michalak as part of the "Young Stage", while in 2018 he performed in the production of the opera "Faust" by Antoni Radziwiłł in Nieborów under the baton of Marta Kluczyńska and directed by Jitka Stokalska.

In 2011 he was a guest on the stage of the Harleem Philharmonie in the Netherlands, performing together with his friends: COV Harleem and Varsoviae Regia Cantores "Passion according to St. Matthew" by Johann Sebastian Bach. In 2013 and 2014 he performed "The Passion According to St. John the Baptist" several times. Jana" in cooperation m.in. Early Music Ensemble UMFC.

A CD recorded with the participation of the choir containing m.in. Franz Lessel's Cantata to Saint Cecilia, published by the Acte Prealable music publishing house, was nominated for the Fryderyk Award in 2000.

Currently, the choir is in limbo and waiting for the next chapter of its history.

Throughout its existence, the choir operated thanks to the support of the Old Town House of Culture in Warsaw.