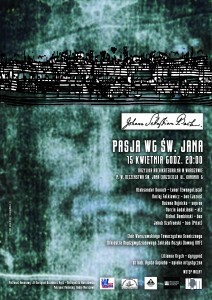 On Tuesday, April 15, we invite you to a concert of lovers of J.S. Bach and all those who, during Holy Week, would like to participate in the mystery of the Lord’s Passion through music.

The term “passion”, from the word passio – Latin suffering, illness, passion, passion, increased affection, in music means the presentation of the gospel story of the Passion of Jesus Christ. Works of this type were performed already in the fourth century, and gained the greatest popularity in the Middle Ages, Renaissance and Baroque.

“Passion according to St. Jana” is an earlier of the two passions of Johann Sebastian Bach, which have been preserved in their entirety. This work was commissioned by the City Council, and its premiere took place on Good Friday 1724 in the Church of St. John the Baptist. Thomas in Leipzig, where Bach held the position of cantor. The Passion consists of two parts, covering 68 numbers, and lasts 2 hours.

In the concert, which will take place on April 15, at 20, in the Archcathedral Basilica of the Orthodox Church. Martyrdom of St. John the Baptist at ul. Canon 6, will be attended by: Aleksander Kunach tenor (Evangelist), Maciej Falkiewicz – bass (Jesus), Bożena Bujnicka – soprano, Marcin Gadaliński – alto, Michał Dembiński – bass, Jakub Szafrański – bass (Pilate). They will be accompanied by: the Choir of the Warsaw Stage Society and the Orchestra of the Inter-Faculty Department of Early Music of the UMFC under the artistic supervision of Dr. hab. Agata Sapiechy. Solo parts from the choir will be performed by: Anastazja Golachowska and Paweł Kowalewski. The whole will be led by Lilianna Krych.

The honorary patronage over the event was taken by HE Cardinal Kazimierz Nycz – Metropolitan of Warsaw, while the media patronage is held by Radio Warsaw.

We cordially invite you! Admission.